Interview with Loris Caporizzi, chef and author of IncrEdibili Insetti

Hi Loris, tell us about yourself and how you approached edible insects
Today I am a fine dining chef who has worked in some of the most famous starred restaurants in the world, gastronomic popularizer, strategic consultant in the food sector and organizer of private events. A few years ago, however, I was a student like many others but deeply interested in studying because I was lucky enough to study what I am passionate about: food and wine.
The conclusion of my studies took place in July 2018, a year that all entomophagy enthusiasts remember well, as it was the year in which, in January, the famous EU Reg. 2283/15 came into force, introducing Novel Foods which includes insects in the category “animals and parts of animals”.
Since the second half of 2017 there was therefore a media boom with regard to the disclosure of information on insects as food and, having to choose the theme of my thesis, what better option than this? The possibility of challenging myself with the goal of overcoming such a taboo (for the Western world) through the creation of a collection of information and a themed tasting seemed really tempting to me and I hoped to capture the interest, as well as of friends and relatives, also of the examination board. In fact it was so, the event that took place in conjunction with my exam was followed by the press and reported in many newspapers nationwide. 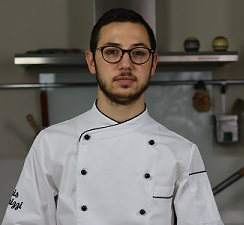 Why did you decide to write a book on the subject?
After finishing my studies, I immediately threw myself into the world I had dreamed of so much: that of multi-starred restaurants. A month after finishing school I was already almost 10,000 km away, more precisely in Bangkok, Thailand, where I worked for chef Gaggan Anand, whose restaurant has been awarded four consecutive awards as the best restaurant in Asia and recently was awarded 4th place in the world ranking.
In the following years I worked very intensely, as is typical of haute cuisine, however I was still obsessed with a lot of information, books, research, scientific articles and much more … why not share all this with others? I wanted to make my knowledge available to everyone and the best way was to turn that so articulated thesis into a book, but I didn’t have the time.
The lockdown gave me the opportunity: when the Coronavirus emergency broke out I was in Paris working for the most starred chef in the world, Alain Ducasse, and, living alone, the obligation to stay at home really gave me a lot free time. So I finally got to put my hand to the material at my disposal and rework it. Then I selected non-copyrighted images and combined with those I already had available, I worked on the layout for the paper and the kindle. Since it was a self-publishing I had to do everything myself. It took five months to turn the thesis into a book and seven to write it; a year of work.

Edible insects are emerging as an innovative ingredient in the kitchen. What can be the role of chefs to propose and promote their consumption?
Indeed, there are currently some high-level restaurants around the world that emphasize insects by including them in some courses of their menu. This is happening today in many countries of the world: from Australia to Thailand and from Denmark to Brazil. However, it remains a product that is not very common in high-end cuisine. I think that chefs should be more daring and, also given their great social impact due to the media coverage of their figure, push consumers to appreciate them more through recipes at different levels of customs clearance of the taboo: you can start with something simpler such as pasta, biscuits and bars based on insect flours, go to intermediate levels such as creams, sauces and purees with added insects that give new consistencies, up to more extreme ways of tasting such as whole insect to be tasted fried, roast. There is no limit: I also ate some large larvae when they were still alive.

What is the most curious aspect you came across while studying the subject?
The most curious and ironic aspect I have come across is certainly the study that highlights how the Western consumer (who firmly believes not to consume insects) consumes insects for an annual average of 500g. That’s a huge amount for those who think they don’t eat insects.
But when you think about it, it is clear … except those that we swallow by mistake while running, cycling or sleeping, they have been used for decades in numerous dyes which are themselves commonly used in the food industry and the hygiene regulations of almost every Western country have tolerance thresholds that report the maximum quantities of insects that can be present in packaged and fresh foods. Sometimes they can be very high. This is because if we think about it we understand that a canning industry that produces tons of tomato sauce every day using millions of tomatoes every day, certainly cannot check them one by one as grandma does when she makes the sauce … the same goes for jams, ketchup, flours, peanut butter, coffee, canned goods and more or less any other product on our shelves or in refrigerators and freezers. 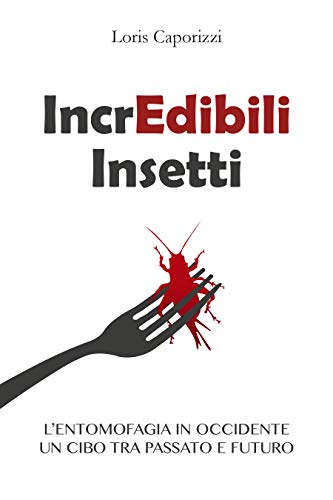 How do your fellow chefs react when you talk to them about insect-based cooking?
I often encounter skepticism even when talking with the technicians of the sector. For some absurd reason people persist in associating insects with dirt, sewers and rotting vegetables. In the preface of my book there is a wonderful comment by Professor Daniele Tirelli, of the IULM University, who underlines how people repudiate insects considering them dirty and then consume the pig abundantly: the dirty animal par excellence (which however is really, and much more dirty than insects). It is really something absurd and inexplicable.

Are edible insects and home cooking incompatible?
Absolutely not. Edible insects are born as street food, a symbol of poor cuisine especially in those unfortunate populations (typically in Africa and South-East Asia) who, being very poor, cannot afford to consume meat or fish (even if they produce it, they sell it, so as to provide for their livelihood by earning a few cents to buy vegetables or clothes). For these populations, insects with their very high proteo-lipid content, are a real super-food that provides them with energy at no cost, as it is sufficient to send the youngest of the family to the open countryside or to the bank of a stream and they will provide dinner while dad works in the fields and mum weaves baskets with wicker and banana leaves.
Sautéed with some herbs and spices, cooked in a soup, fried with white rice. Anyone can make them at home and add flavor, texture and nutrition to any national recipe. Any country in the world.

As a kitchen professional, what are the arguments you would use to convince Italian grandmothers to use them in their dishes?
Probably the thing that can work best is to focus on the theme most Italy’s grandmothers are sensible to: how nutritious they are! Probably if the grandmothers knew that, proportionally, a handful of grasshoppers is almost twice as nutritious as roast chicken, they would be more than available to prepare them pan-fried.
And if that were not enough, they should be informed that by cooking insects and decreasing the use of beef and meat in general, they will guarantee their grandchildren and great-grandchildren a better life on this planet. By reducing emissions, the greenhouse effect and global warming. By limiting the waste of water resources and the use of cereals that could instead be destined for children of the age of their grandchildren who are dying of hunger in Africa etc.
In addition, insects would be very good for grandmothers too, reducing the dietary intake of saturated fats which are by no means a boon to protect their health. In fact, insects are rich in mono and polyunsaturated proteins and fats which are highly health-protective.
Well … if insects went from taboo associated with disgust to a product of common use we would all gain. Animals, plants and humans. We could enjoy a better, healthier world and we could enjoy it longer. Just if we want it.

The english version of the book will be out after mid October 2020…stay tuned!