The situation in Uk after Brexit

Following BREXIT and months of uncertainty around the status of edible insects in the UK market, the Woven Network has been lobbying the Government to accept the inherent safety and value of these food items.

We believe that over 1m UK consumers have already eaten insect products prior to them being reclassified as Novel Foods and requiring formal approval.

We are very pleased that the Statutory Instrument laid by the Government in Parliament that included the provision to create a Transition Arrangement covering edible insects was agreed following a very short debate with no dissenting voices in both Houses. This gives the edible insect industry the legal clarity it has needed following Brexit.

Dr Nick Rousseau, Founder of the Woven Network said: “Following BREXIT, the sector has been in limbo regarding the legal status of edible insects in the UK. We have been presenting a consistent message to the Government, backed up by considerable evidence, that insects are safe to eat and this news shows that they recognise this. 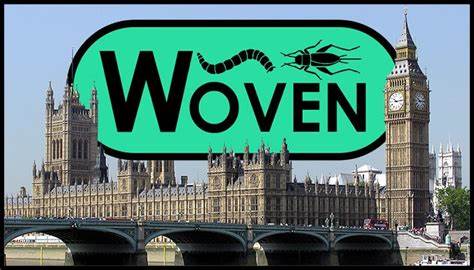 We have already submitted an extensive dossier of evidence to show the safety of House Crickets (Acheta Domesticus) to the FSA and look forward to their approval of these as food ingredients in GB. We are equally confident of the safety of the five other insects that are covered by the Transition Arrangement and the ability to legally trade these from the date this SI becomes law will enable our members to build the funds to enable further dossiers of evidence to be compiled and submitted.
Our conversations with major UK supermarket chains as well as festivals and events around the country demonstrates the considerable appetite of British consumers. This legislation enables them to benefit from this highly versatile, nutritious, tasty and sustainable alternative source of protein.”

Aaron Thomas, Yum Bug Director and Chair of the Woven Board said: “We are delighted that Parliament has agreed to give the edible insect transitional measures the green light. Regulatory confusions post-Brexit have made it difficult for UK edible insect businesses to grow, including our own, due to delays in product launches and greater scepticism of the sector by potential business partners and customers who would otherwise love to be involved.”

The Legislation agreed by Parliament

Regulation 20 of the SI will amend Article 35 of retained Regulation (EU) 2015/2283 on novel foods in relation to the transitional measures for edible insects as laid out in our recent public consultation. A link to the agreed SI can be found here:

Direct link to regulation 20 on the transitional measures for edible insects:

The House of Commons committee debate was on 28 November at 18:00. Details can be found here:

The seven insect varieties covered by the Transition Arrangement are: