A short talk with Aleksandar Gavrilović, founder of Insektarij and Marko Glogoški from Winning Eleven Brewery. 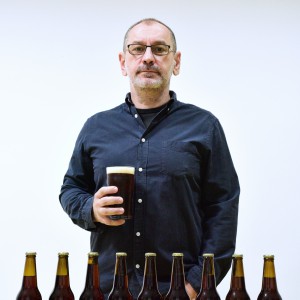 Hi there, it’s been a while we don’t chat. How’re things going on?
Aleksandar (Insektarij): We are still waiting for the changes in legislation in the Republic of Croatia, and in cooperation with the Faculty of Veterinary Medicine, University of Zagreb, we continue to conduct scientific research on insects that we breed and sell on the market. In the last three years, we have completed all BSFL-related projects, which has allowed us to fully dedicate ourselves to the crickets, which has proven to be more profitable and the profit from sales allows us to fully finance our farm, while we invest the rest of the income in scientific research. Also, in cooperation with the Faculty of Agriculture, University of Zagreb, we are completing the project “Cricketizer – organic fertilizer as a by-product of insect breeding.” At the experimental field of the Faculty of Agriculture, all the necessary experiments were performed, all of the analyzes of the crickets’ excrement, soil and plants were completed. We are currently in the phase of analyzing the collected data and we expect that by the end of 2021 we will be able to publish the first results of the research, which are quite promising for now.

We know you started a new interesting project, can you tell us about?
Aleksandar (Insektarij): We are extremely pleased to announce that, in collaboration with colleagues from Winning Eleven Brewery, we are nearing the successful completion of a one-year project of producing a beer with the addition of cricket flour. As a result, we can present you cricket beer – Black Spruce. As far as we know, Black Spruce is the first European / Croatian beer with the addition of cricket flour, and it was named after the anthological poem by the Croatian poet Vladimir Nazor “Cricket” (There chirps and chirps a cricket on a knot of a black spruce tree)
We faced several challenges in the project. One of the biggest challenges was reducing the fat content of the cricket because fat is not desirable in beer production technology. Since Insektarij also deals with the optimization of insect food with which we can nutritionally modulate the insects themselves, we solved the problem by producing special food from which we removed most of the fat. We also managed to use barley malt, which is one of the by-products of the brewing industry, and we incorporated it into the food for our insects. Of course, to avoid a cross-reaction we do not use barley malt which was used to make beer to which cricket flour was added.

Why beer with edible insects?
Aleksandar (Insektarij): For the past six years, we have been trying to bring people closer to the potential of edible insects as a source of animal protein in the human diet. In that endeavor, and in order to show the versatility of that potential, we decided to try to make something that would not be presented as food and the beer proved to be the ideal solution. Namely, many years of practice have shown that people often refuse food that contains insects and the beer proved to be a winner – we do not remember that anyone refused to taste crickets’ beer. Also, due to the technology of growing, the price of a kilogram of cricket protein will hardly ever be competitive with the price of a kilogram of yellow mealworm protein or BSFL, so we think that the cricket will find its way to the market exclusively in products such as beer.
Marko (WEB): We wanted to see if it was possible to add crickets to the beer and see which flavours they impart. The biggest obsticale was reducing the fat content of the crickets since fats, even in low quantities, reduce the shelf life of beer through oxidation and negatively impact head formation and retention. 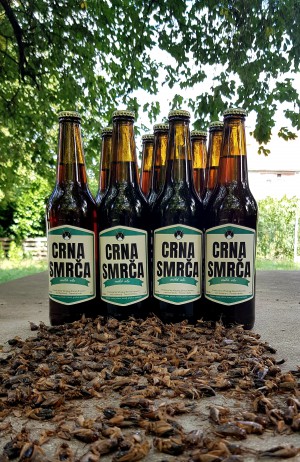 Can you describe the additional taste offered by the presence of the insects’ flour in the making of the beer?
Marko (WEB): Crickets added some caramel-like flavours similar to dark malt varietes and their protien richness adds to the fullness of the body and make a rich head. Additionaly, flavours that come from baked crickets are a little bit different than ones from malted barley so this adds to a unique flavour of the beer.
Aleksandar (Insektarij): The taste primarily depends on the way the cricket flour is prepared, mostly on the frying temperature (Millard reaction). In addition to the taste, we were pleasantly surprised by the fact that the beer matches the color of the crickets.

Can you sell the products at the moment?
Aleksandar (Insketarij): Unfortunately, the current legal regulations in the Republic of Croatia do not allow for such a product to be placed on the market. However, there are two reasons that we consider 2021 a turning point when it comes to edible insects and their market placement. The first is that the European Commission has accepted a scientific opinion in which EFSA (European Food Safety Agency) confirmed that the consumption of dehydrated, frozen and ground yellow mealworm, cricket (only Acheta domesticus for now) and locusts is not harmful to human health. The second reason is the European Commission’s decision approving the use of processed insect-derived animal protein (PAP from insects) in poultry and pig feed – which we consider to be overcoming the last obstacle that stood in the way of edible insects to our tables. Therefore, we expect a change in the legislative framework, and we believe that our beer Black Spruce will be available on the market by the end of 2022.

What feedback you had from the people already tryed it?
Aleksandar (Insektarij): The response is amazing and we are currently making a “waiting lists” for all those who want to taste Black Spruce because everything we produce disappears the same day. Also, we were fascinated by another thing – whoever tasted Black Spruce, the first thing they said was that the beer does not taste like insects. Our question to define this “insect taste” still remains unanswered.
Marko (WEB): Most people are surprised that it tastes like regular beer. Basically, this is ‘regular’ beer with some unique tastes from crickets but is in fact still a beer. People like the malt flavours and bitterness in it.